One Mainer’s abortion story, Part 2 While Maine has some of the least restrictive abortion laws in the nation, the anti-Roe v. Wade majority on the Supreme Court and a raft of anti-choice legislation from Texas to Montana has put women’s access to abortion services in the crosshairs. One of the so-called right-to-life movement’s most vicious tactics is to shame and blame people who decide to terminate a pregnancy. Refusing to be silenced and talking openly about abortion is one way to resist. Here, in Part 2, a Mainer named C.H. analyzes the anti-choice movement’s deceptive rhetoric and explains how to fight for comprehensive, fully-funded sex ed as one means of combatting it. In Part 1, C.H. described the thoughts and feelings that went into getting her own abortion.

Years after my abortion, visits to Planned Parenthood were gynecological in nature. Despite the nature of my appointments, I still had to pass through the troupe of anti-choice activists (who were eventually forced to stand on the other side of the street). Even as someone who was fairly confident in my decision to have an abortion, I was afraid of the unknown. Anti-abortion activists have carried out violent acts against women and abortion clinics alike. 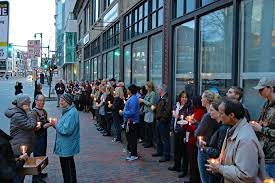 Anti-choice activists line up in front Planned Parenthood in Portland.

The pro-life movement, in a strictly legislative perspective, ends at birth. Curiously, legislation that strips them of their bodily autonomy for the sake of the unborn does not often align with sanctifying human life after a person is born. The main premise behind the protection of an unborn child is the concept of “innocence.” The secondary premise is that a woman will always, or more often than not, regret an abortion and face deep physical or psychological trauma afterwards. I wonder why their devotion to children’s innocence and women’s psychological health stops at birth.

According to the Maine Right to Life Committee, they believe in the “inviolable sanctity of human life” when it comes to “abortion, infanticide, doctor prescribed suicide and euthanasia.” Yet, they seem to view “life” in a vacuum where one person’s suffering is pushed aside in favor of their own abstract concept of life. The MRLC dedicates a page to “healing after abortion” in which they write, “We have been told by post-abortive women that the abortion clinic advised them not to tell anyone about their abortion, because they would be judged or shamed.” They also promote several evangelical-based programs, claiming that “If you or someone you know is suffering from the grief of an abortion, we can recommend several loving, judgement-free organizations formed to assist you in your healing.” But isn’t MRLC one of the entities most responsible for this judgment and shame?

The hypocrisy is palpable. As a pro-life activist outside of women’s health clinics, your job is to intimidate, judge, shame, and blame, and then take in the confused victims of your ire and tell them that you alone are there for them and you understand their pain. Your job is to weaponize complicated and painful emotions.  Just as abortion can be a relatively conflict-free decision, it can be a complicated one. Instead of emphasizing non-biased, educational material, and women’s freedom of choice, the pro-life movement seeks to suppress this information. There are, of course, women who regret their abortions. Those women should be heard and treated with kindness and understanding. Women who regret their abortions ought not be weaponized by the pro-life movement.

The anti-choice movement rejects the notion that abortion is always a sound and trauma-free experience for women. I reject the notion that abortion is always a life-threatening and psychologically damaging experience. In fact, it is rarely black and white. It is an individual decision made for complex and private reasons. That is why we must always have the freedom to choose. This basic idea is the bedrock of the pro-choice movement: respecting the spectrum of feelings and experiences that go into the decision to have an abortion or give birth. The callousness of telling someone like me that I must be “forgiven” for having an abortion, when those who “forgive” me know nothing of my circumstances, is nothing short of ignorance. 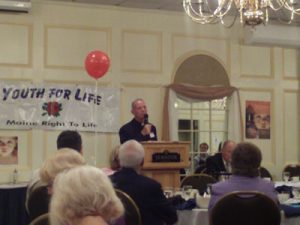 As it turns out, some women in the anti-choice movement have suffered the consequences of their own rhetoric when faced with unwanted pregnancies. In “The Only Moral Abortion is My Abortion,” Joyce Arthur, founder of the Abortion Rights Coalition of Canada, details testimony from workers at family planning clinics describing how anti-choice women rationalize their own abortions while still condemning the choices made by others. One physician from Washington state shared a story that resonated with me deeply:

“We have anti-choice women in for abortions all the time. Many of them are just naive and ignorant until they find themselves with an unwanted pregnancy. Many of them are not malicious. They just haven’t given it the proper amount of thought until it completely affects them. They can be judgmental about their friends, family, and other women. Then suddenly they become pregnant. Suddenly they see the truth. That it should only be their own choice.”

Fighting the anti-choice agenda does not have to be one-size-fits-all. And anti-choice sentiments aren’t exclusive to religious communities or political affiliations. In fact, there are anti-choice feminists, anti-choice women, and anti-choice secularists. So it’s a complex picture. So what’s the best way to defend women’s right to choose? I’d suggest that one particularly useful method is advocating Sex Ed through local school boards and the state legislature.

We should fight for comprehensive sex education, which is both age-appropriate and inclusive for all students. We should work to de-emphasize abstinence, which is currently a legal “must” for sex education programs in Maine schools. We should focus on how local school boards choose to elaborate basic requirements for sex education and get acquainted with the people that make those decisions. From there, we can propose ancillary requirements for support sex education, like pushing for accessible contraceptives on school property, educational materials free to view and use, and ongoing, organized, and unbiased discussions between educators, students, and the greater community.

Maine does not require abstinence-only education. And, thankfully, it passed a law in 2019 ensuring “affirmative consent” be part of sex education. However, the quality of sex ed depends largely on local funding and school boards are responsible for elaborating more detailed curriculums. Between inadequate funding and local opposition to comprehensive sex ed, programs may vary wildly. When school boards won’t budge and funding is lacking, one way to confront anti-abortion activism is to become politically active and learn how the state legislature works. Here are some tips:

First, get to know your local legislators.

Second, look up the bills they are sponsoring in the Maine legislature.

Here are a few examples of recent bills regarding abortion in Maine. Do you see your representative’s names? (Note, LR stands for Legislative Request, meaning the proposal is in its initial stages.)

“40 Days for Life” rally in August near the state house.

LR 839 Rep. Sampson Heidi of Alfred. Title: An Act To Prohibit the State from Awarding Grants or Federal Funds To Fund Elective or Nontherapeutic Abortions and To Create the Maine Foster Care and Adoption Initiative Fund.

And, third, hare your opinion with legislators through email, phone, or written letter. Make it personal, be specific and to the point, explain your position and how it will affect your local community, request they respond and not leave you on read, and don’t assume legislators are experts.

An appeal to think again

To those who are anti-choice, I implore you to reconsider the notion that people who get abortions do not value life. You must consider the possibility that, while life can be seen as virtuous in itself, the decision to have an abortion may come from a place of mercy. My own grief was compounded by the fact that if I were to carry a child to term, my choices were limited to raising a child that would be affected by my personal issues and financial capabilities, or I would have to hand it off to either the state or an adoptive family. I experienced the anxiety of a potential late-term miscarriage and the prospect of my child being born with a host of medical issues induced by my own self-harm, financial precarity, and genetic dispositions.  If I decided to keep this child, I would most certainly have had to rely on the good graces of my parents, who had both worked very long and hard to create enough financial stability for our family for me to receive a higher education. This is not to say that they would have refused to support my decision. But it certainly would have been burdensome, even if I am sure they know just how wonderful raising a child can be. So before you rob me of control over my own body, you should acknowledge that I have thought this through for myself.

In the state of Maine, we are afforded freedom of choice that many other states do not provide or actively discourage. We must defend those freedoms. In 2022, we will likely see abortion move to the center of political discourse as mid-terms loom and key pieces of current legislation are challenged. My decision was a refusal to bring a child into a cruel world where I knew I didn’t have the tools to properly cultivate and warmly welcome them. It was not my time. It may one day be. But for now, I am satisfied with the decision I made, and I wish the same for every person that gets pregnant, regardless of whether or not they decide to keep their child. Above all, I wish that we work together to make our society more supportive of human life, after we exit the womb. 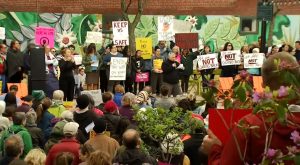