The City of Portland and food truck owners are overlooking simple and sustainable solutions in their escalating showdown over trash on the Eastern Promenade. If you haven’t been to the park recently, morning visits now often include the sights and smells of overflowing trash cans alongside the view of Casco Bay and the sea breeze. The trash is clearly a result of this being a popular spot for food trucks—napkins, takeout containers, plastic cups and utensils are the main items bursting out of receptacles. The number of food trucks in Portland has increased by at least 20% since the pandemic began and the trash infrastructure was clearly not planned to handle this heavy load. 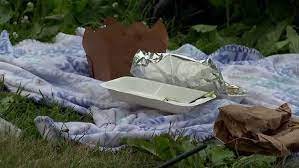 Recent coverage in the Portland Press Herald and Bangor Daily News shows that the city and the food truck owners are more interested in blaming each other and the public for the problem rather than finding realistic, sustainable solutions. Food truck owners say they provide trash cans but can’t make people throw things away there. The city says they’ve added more trash cans and remove trash daily, and has even threatened to ban the trucks from parking on the prom. Both truck owners and the city have implied that the public is to blame.

Food truck owners seem mostly interested in shifting the problem onto someone else, whether it be the city or their own customers. After all, they are relying on publicly-funded infrastructure to handle a part of the cost of their business, which allows them to pocket more profit. The cost of waste removal, which would otherwise have to be covered by the business, is instead passed on to the city, or more accurately, to the people whose taxes fund the city. They have no material incentive to solve the problem. Of course, this is not only a problem for food trucks, but an inherent contradiction in attempting to develop a sustainable way of life under capitalism. Businesses add to their profits by exploiting workers and the natural world, and by reducing costs by externalizing them to the public, whether they are direct costs, like that of trash removal, or more indirect costs like the destruction of ocean ecosystems because of garbage and microplastics.

The city’s proposed solutions are weak and focused on keeping Portland (or at least the tourist-luring Eastern Prom) clean and aesthetically pleasing and show little actual concern for the environment or sustainability. Neither adding to current trash infrastructure nor banning food trucks from the area will decrease the overall amount of garbage created and released into the environment. Banning trucks would only displace the litter to another community and ecosystem. And regardless of where it’s created and whether it ends up incinerated and in the air, in a landfill, or floating in the ocean, what we throw away is never really “away.” Even if we can’t see the immediate effects, the devastation of garbage on nature and humanity impacts us all. 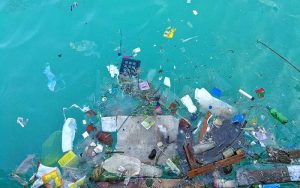 The problem is more complicated than either side is making it out to be, but the responsibility for the problem shouldn’t be put on the public. Walk the Prom on a Monday morning and you won’t see much trash strewn around the park. Some litter will be making its way down the hill, probably scattered by wind or gulls. But most of the trash is stuffed into overflowing trash cans or stacked as neatly as possible atop or beside them. Plastic utensils line the rims of the recycling bins and the ground around them. Unfortunately they aren’t recyclable; this is a perfect example of “wish-cycling,” the practice of throwing an item in the recycling bin and hoping it will be saved from the landfill. All this evidence suggests that most food truck customers have the best of intentions to deal with their trash responsibly. After all, they are at the Prom in the first place to enjoy a beautiful spot and tasty meal. It makes sense that they wouldn’t want their picnic destination marred by garbage. There simply aren’t better options available to the public for disposing of the trash.

The three R’s of sustainability (reduce, reuse, recycle) can provide some better solutions to this problem. Recycling is currently hampered by its reliance on the market to sell waste, and by limitations on recycling plastics, making reducing and reusing the two R’s to emphasize here. The most sustainable option bridges the two: requiring food vendors to implement reusable dishes and cutlery. In current American culture, convenience and disposability are the norm. But this isn’t the case everywhere.

At street festivals and food stalls in Germany, it’s standard for customers to provide a couple euros as a deposit along with the cost of their food or beverage and be served with real, ceramic or glass dishes. When the customer is finished with their food and drink, they return the dishes, get their euros back, and are on their way. Yes, some dishes are lost due to breaking, someone forgetting to return them, or keeping them as a souvenir, but this is covered by the deposit. Food trucks might have to add to their dishwashing capabilities, but this is a cost of their business that they should be held accountable for. Both the city and vendors could even use a deposit system as a marketing plug to eco-conscious customers whose actions make it clear they want to be responsible with their trash. With a deposit system, the trucks would not have to fear being kicked out of prime locations due to trash. 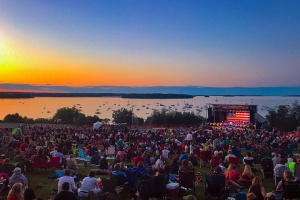 For waste that cannot be eliminated by reusable options, the city should require that all waste created by food trucks be biodegradable and compostable. Food trucks should be required to provide waste containers to collect industrially compostable waste. This would also provide a better solution to uneaten leftovers than the trash can or a seagull’s belly. On a grander scale, the City of Portland should consider implementing a public composting system, like the pilot project currently underway in South Portland. The program could be partially funded by high-compost-generating businesses like food trucks and restaurants. Such a move would make public the currently privatized composting infrastructure to ensure that composting is being done in the community’s best interest with its only intention to reduce waste and not to make a profit. Ideally, jobs created by a public composting program would pay a living wage and be unionized.

Food truck owners and the city have gotten into a battle over who is to blame for the garbage problem and what the consequence for the responsible party should be. Both sides are limited in their analysis of the problem because they assume that massive amounts of single-use paper and plastic are unavoidable and the existing garbage infrastructure is the only way to handle this unavoidable waste. This is untrue. The simple principles of sustainability provide clear answers to the current tension over trash between the city, food trucks, and the public. Reusing and reducing can not only mitigate a problem, but provide an example of how we can rethink our relationship to waste. It is possible to produce less waste to begin with and dispose of the garbage still created in a more sustainable way, but it requires business owners and the city to take responsibility for the costs of maintaining our public spaces and ocean ecosystems.

Kara Kralik lives and teaches in South Portland. She is a member of the Maine DSA education committee and writes for Pine and Roses.