“Socialism is not a question of parliamentary elections, but a question of power.” These were among the last words that socialist revolutionary Rosa Luxemburg wrote before her assassination by counterrevolutionary forces in Germany in 1919. Vindicating her suspicion of an electoral path to power, Luxemburg was arrested and murdered with the tacit approval of the Social Democratic Party that had recently won a majority in the German parliament.

Luxemburg scholar Helen Scott recently joined Maine DSA’s Study Group, in conversation with one of the Group’s organizers Jessie Muldoon, to discuss the enduring relevance of Luxemburg’s ideas, particularly the question of how the working class majority could succeed in “taking power and putting an end to the exploitation and oppression that is baked into capitalism.” The Study Group is reading Luxemburg’s short book Reform or Revolution, edited by Scott and published by Haymarket Books with a companion text by Luxemburg, The Mass Strike.

Scott points out that the title Reform or Revolution is misleading, as if reform and revolution are mutually exclusive options. Luxemburg argued that struggling for reforms within the capitalist system is necessary — as a means toward the revolutionary end of social transformation, which can be achieved only by masses of ordinary people organizing collectively to take power away from the capitalist class.

Luxemburg opposed not reforms but reformism, the idea that social transformation can be achieved through elections alone. Scott observes that “real power is deeply embedded in capitalism, in the non-elected bodies that that own and control, from the capitalists and corporations to the judicial system and military establishment.” As a result, when socialists manage to win office, they are either removed in violent coups (e.g., Chile in the 1970s) or forced to accommodate the financial interests of capitalists (e.g., Greece in 2015).

Scott says Luxemburg can help us understand how socialists should relate to the Democratic party in the U.S., which “presents itself as the reform option though of course they’re a capitalist party” that joins the Republican party in such bipartisan projects as “building ICE and hastening deportations, detentions, and criminalization of migrants…. When Trump was in power there was a vibrant immigrant rights movement, but the Biden effect has muffled organizing around this as well as other issues. So even when racist border guards are caught on video beating Haitians, there’s less protest than if the same thing happened under Trump.”

No matter who is in power, Scott argues, “activists must continue to organize independently to oppose injustices and defend our rights.” Luxemburg “recognized our side has to be organized in practice and informed in theory if we’re to defend ourselves and build alternatives…. Everything that is valuable both globally and locally that we can call a right today was achieved by courageous working class people taking collective action, from the weekend to anti-discrimination polices.”

But, Scott emphasizes, “to be effective in those struggles we also need … the greater vision of social transformation.” Otherwise, “these victories are limited and partial as long as the capitalist system remains in tact. They’ve got to be extended and fiercely protected or we lose them, as we’ve seen with the dismantling of the gains of the civil rights movement or the threat currently to abortion rights.”

Luxemburg not only saw clearly the limits of reforms, she also pointed the way toward revolutionary struggle in the form of the mass strike. Scott finds hope in this possibility today: “In one of the bright lights of the otherwise very grim period that we’re living through, the last few years has actually seen the return of the mass strike globally, in ways very reminiscent of Luxemburg’s Mass Strike. The half million South Korean workers currently preparing for a general strike right now is just one of a string of examples.”

Those who missed the conversation with Helen Scott can watch the recording here. The Study Group will meet again this Wednesday, October 27 at 6:00 pm to discuss Part I of Reform or Revolution, and conclude with a discussion of Part II on November 10th. The series is open to members of the public. More information is available in the Study Group’s syllabus.

END_OF_DOCUMENT_TOKEN_TO_BE_REPLACED 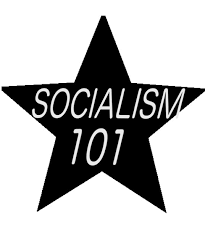 This is the fourth and final installment of Maine DSA's Crash Course series. This series focused on introducing different topics related to socialism. One aim of this project was to have everyday...

END_OF_DOCUMENT_TOKEN_TO_BE_REPLACED

Maine Democratic Socialists of America presents: Socialism 101 Crash Course. This video is part of a series designed to introduce new DSA members and anyone who's curious to the ABCs of socialist...