What Mainers can do for Palestine

You might have seen the recent clamorings for US citizens to denounce the state of Israel and oppose its ongoing brutality against Palestinians. In response, you may have said: I live in Maine! What do I have to do with this? Why is this a cause worth taking action for?

The recent mainstream media discussion about Israel and Palestine centers around the forced displacement of Palestinians from their homes in Sheikh Jarrah, a mostly Palestinian neighborhood in Israeli-controlled East Jerusalem. However, these displacements and the brutality accompanying them are not new. In the 1948 war, Palestinians were forced out of their homes. In 1970, the Absentee Property Law and Legal and Administrative Matters Law were passed, determining which Palestinian properties can be repossessed by the state of Israel. Since 1970, Sheikh Jarrah has been surrounded by several Israeli settlements and Palestinians returning to the neighborhood have been subject to a long history of evictions determined by courts. Some of the most recent Palestinian families facing eviction have been living in Sheikh Jarrah since 1957. These are families who lived there prior to 1948, and were part of the few allowed to resettle after the war. Recently, Palestinians fought back against these evictions and their resistance was met with brutal force from Israeli police. 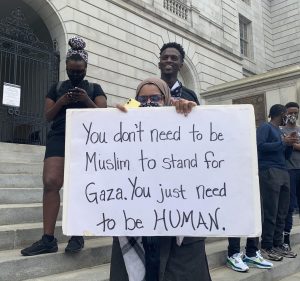 So, how are we as Mainers involved in this conflict? Predominantly through taxes and trade relationships. According to the US Campaign for Palestinian Rights, US residents pay, on average, $25 annually towards weapons sales in Israel. In total, the US has agreed to give $38 billion to weaponize Israel between 2019 and 2028. In addition, the Maine Military Authority has vied for Humvee contracts with the Israel Defense Forces, mainatins military contracts with Israel, has concluded weapons sales totalling over $10 million to Israel, and since 1996, has exported almost $300 million worth of products to Israel.

So, what can we do? One option is participating in the Palestinian-based Boycott, Divest, and Sanction movement (BDS). Modeled after the anti-apartheid movement in South Africa, the goals of the BDS movement are to pressure Israel to meet international law obligations by: withdrawing from occupied territories; removing the barrier in the West Bank; discontinuing the systematic discrimination of Arab-Palestinian Israeli citizens; and allowing Palestinian refugees to return to their homes and properties.

At times the BDS movement has been unfairly associated with antisemitism, so it is helpful to distintiguish between antisemitism and anti-Zionism, and to distinguish anti-Zionism from the goals of BDS. Zionism is an ideological nationalist movement that seeks to establish a Jewish state in the ancient holy land of the Jewish people. In the name of Zionism, settlers have seized land, expelled Palestinians from their own land, and perpetrated violence, with plenty of examples found in this 2020 Amnesty International report. Criticism of the state of Israel often goes in tandem with opposition to Zionism. However, there are many people who call themselves Zionists (or who are sympathetic to the idea of a Jewish state) who are opposed to US military aid and to Israel’s exclusionary and expansionist policies. Moreover, not all Jewish people accept Zionism, and critique of Israeli human rights violations does not imply antisemitism. Antisemitism, broadly defined as hostility and discriminatory practices towards Jewish people, is exemplified instead by recent incidents like the Unite the Right Rally that occured in 2017, where marchers carried Nazi flags, made Sieg Heil gestures, and chanted “Jews will not replace us.”

Likewise, not all Zionists are Jewish; for instance, many US-based fundamentalist Christians and politicians from both the Democratic and Republican parties are pro-Israel. Such support for Israel among US leaders and citizens, as well as conflation of anti-Zionism with antisemitism, has produced several anti-BDS bills in the United States. People in the US have been pressured to sign anti-BDS contracts that, if violated, would mean they would face fines or jail time. As of this year, 35 states have passed bills or executive orders that discourage boycotts against Israel, and the details of those enacted laws vary state to state. Anti-BDS bills have been proposed in Maine, and as of 2017, were voted by a majority “ought not to pass.” 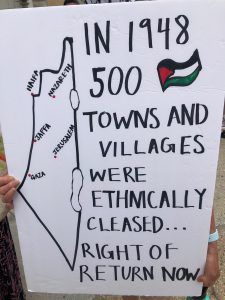 Sign at May Portland rally in solidarity with Palestine. Photo credit Pine and Roses

So, if we want to support BDS and protest Israeli practices in solidarity with Palestine, what should we boycott? BDS boycotts target specific companies that have direct involvement with Israel’s violation of international law and discrimination towards Palestinians, or operate on illegally occupied Palestinian territory. These include imported Israeli fruits, SodaStream, Pillsbury, Sabra Hummus, Ahava Cosmetics, Air BnB, US Caterpillar, Hyundai Heavy Industries, and Hewlett Packard. A full list can be found at the BDS website.

As individuals, we can also request that institutions and companies financially divest from the state of Israel. Maine has received $61,000 in grants from the binational U.S.-Israel foundations for joint research in science, agriculture and promotion of commercial ventures. According to the Jewish Virtual Library, institutions such as “Bigelow Laboratory for Ocean Sciences, Jackson Laboratory, Maine Medical Center Research Institute, and [UMaine in Orono] have received BSF Grants.” Mainers can also contact local papers regarding editorials that whitewash the nature of the Israeli apartheid by using language such as “evictions” instead of “forced displacement” or “conflict.” Finally, we can encourage sanctions by contacting our legislators, representatives, senators, and governors. Even further, anyone that wishes to participate more actively in the BDS movement can join a local BDS group like Peace Action Maine  or Maine Voices for Palestinian Rights.