A number of great drug sentencing reform bills have been making their way through the Maine legislature this session, which has given the Maine DSA’s Drug Policy Subcommittee a lot to organize around, and we aren’t disappointed.

We kicked off the legislative session with a three episode series on the podcast “The Maine Mural” about the War on Drugs and where it stands now. We also held a “Movie and Panel” event for DSA members where we viewed the 2012 documentary about Nixon’s failed drug war titled “The House I Live In,” with a panel discussion that included recovery professionals and people in recovery.

Luckily, those events garnered interest in what we were doing, and we felt it was time to hit the ground running. So, we quickly moved into researching the drug sentencing reform bills that were making their way through the 130th Maine Legislative Committee on Criminal Justice and Public Safety (CJPS). A bill that particularly caught our attention in the DSA and the recovery community as a whole, was LD 967: An Act To Make Possession of Scheduled Drugs for Personal Use a Civil Penalty. sponsored by Representative Anne Perry (D-Calais) who has been one of many champions for the recovery community here in the Maine Legislature. 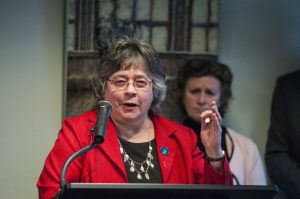 Currently, if found guilty of possession in Maine, one could be charged with a misdemeanor and face a fine and possible jail time, or they could face a felony and receive up to 10 years in prison. LD 967 would change that, making possession a civil penalty, which would take away any chance of jail time, and if found in violation, the person charged would either have to pay a $100 fine or be required to undergo an assessment for substance use disorder. Giving them a chance to receive treatment and stopping them from being required to circle yes when asked: “Have you ever been convicted of a crime?”. In essence LD 967 would treat substance use disorder as the public health issue it is instead of the criminal justice issue that it isn’t, and we in the recovery community say it’s about damn time!

Just look at the number of people we’ve already lost this year to overdose. We are averaging 11 people lost every week just in Maine. We are well on our way to hitting another record year for overdoses, and it just proves that what we are doing is not working.

The Maine recovery community and our allies came out in support of LD 967 this past Wednesday, June 9th to bring attention to Maine’s policy failures and the consequential deaths that accompany them. We went to the Capitol Building to tell Maine legislators that it’s high time to support us instead of criminalizing us.

We made it known that we are no longer going to stand by while the failed Drug War kills our friends, family, and neighbors. Instead we’re ready to open channels of communication in order to reach people where they’re at and get them into treatment. By criminalizing substance use we are not fostering recovery, we are fostering isolation by taking the person out of their community and putting them in jail, and we’re fostering stigma by making them tell employers, landlords, and others for the rest of their life that they have a past that includes using substances. 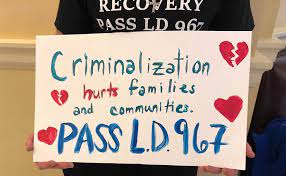 The reception we received from many of the lawmakers at the Capitol Building that day was welcoming. While advocating for LD 967, we have found that we have a lot of support out there from the professionals that work with substance use disorder, with doctors, and with people who have either experienced addiction themselves or have a loved one who has experienced addiction. Now the legislature needs to vote with the community and with what the research shows us: that what we are doing now is not working. We cannot continue to wait while our friends, family, and neighbors are dying.

Another bill that is making its way through the legislature right now that the Drug Policy Subcommittee has been focusing on is LD 1675: An Act To Amend Certain Provisions of Maine’s Drug Laws. LD 1675 would make it so that the police would actually have to prove that a person had intent to sell the drugs they possessed, or give the drugs away that they possessed, in order to charge them with trafficking or furnishing. Right now if a person has more than 2 grams of heroin in their possession they can be charged with trafficking of scheduled drugs, regardless of whether there is proof that they intended to traffic or not. LD 1675 would reform that law so that the police would have to have some other proof that the person actually intended to sell or give away their drugs, and not just because they possessed more than 2 grams of a substance.

Please contact your legislators and urge them to support LD 967 here and LD 1675 here. Tell you Representative that as their constituent you are demanding that they pass these two drug sentencing reform bills ASAP and that we start managing addiction with medical treatment instead of jail! By going to these links you will be brought to a letter campaign and it will send a pre-drafted letter to the Representative in your House district. You can also customize the letter before sending it for better effect.

If you would like to also contact your Senator you can find out who they are by going to openstates.org. We hope you join with the rest of us in the recovery community to support reforming our punitive drug laws. Stay tuned for what’s to come.

Mikki Rice is the Chair of Maine DSA’s Maine Commons Committee (that houses the Maine Public Power Campaign), and is active in Maine DSA’s Drug Policy Subcommittee. She graduated from the University of Maine at Augusta in 2015 with a Bachelor’s Degree in Mental Health & Human Services, and has since worked as a social worker and case manager with youth in the Maine foster care system. She has also worked with the recovery community in a professional capacity, and has had lived experience being a person in recovery. She is a resident of Freeman Township in Franklin County.