This is part of a series, “The Great American Burnout,” that focuses on interviews with Mainers who experienced burnout during the pandemic. Sam Spadafore sat down with writer Eric Wefald (he/they) about their time at Preble Street and why he decided to walk away.

Upon first meeting Eric Wefald, I realized how passionate he is about working with some of our most vulnerable population. He left his job at Maine People’s Alliance to start at Preble Street as a case worker towards the very end of 2020, when we were well into the COVID pandemic.

Wefald loved it when they first started. Preble Street began in the 1970s as a harm reduction center where people who used drugs could have a safe place to use without stigma or run-ins with the police. They continue to serve those who are unsheltered, food insecure, and serve those who no one else in the city wants to work with.

“I really loved the organization when I first started,” Wefald told me, “I kept telling my friends it was an organization I didn’t feel like I had to compromise on my values by working there. Their values of unconditional positive regard, which is a social work principle, of giving complete and total love and support to those we are working with. Then seeing that throughout the whole organization.”

Wefald explained that many of the people they serve have high barriers to accessing services, which can make for some incredibly challenging work. They continued, “I felt like I had found a place that I really felt comfortable in, really safe in. It was really difficult, but I’d say for the first four or five months I really loved it.”

The pandemic presented new challenges to the front-facing work that most social workers were doing. Many aspects of the job involved being out in the field working with clients in person, which became impossible to do safely. The mandate from the organization was to stay at home but the nature of the work is to be out in the community. Much of Wefald’s work became helping clients fill out applications for housing or other services.

Since Wefald lived close to the shelter, and he knew how much his clients needed him, he decided to go into the office anyway.

Wefald realized that Preble Street was incredibly understaffed. They came to a realization that the person they were replacing was most likely leaving due to burnout because she was only there for five months.

They also felt like they weren’t able to truly help their clients while working there, “I personally don’t think I helped to actually house a single client when I was at Preble Street. For the entire year I didn’t house a single person. It was all work people had done before.”

Permanent housing was difficult to come by. Preble Street’s goal is to give clients sustainable, long term housing. Waitlists for subsidized housing were long, most market rate housing wasn’t available, none of their clients could even be housed together.

“I told many people about the absurdity of this. The idea of an SRO – a Single Room Occupancy in a boarding house – the average cost could be $1,050 a month which completely astounded me,” he said. “How the hell are we going to help somebody afford a $1,050 a month apartment when they only have income from Social Security, Social Security Disability Insurance, or the Veterans Affairs office? It’s not enough money to sustainably house somebody.”

Not only is gaining access to services incredibly difficult, but any affordable housing available after long wait periods were usually rat infested, in disrepair, and made for an unsafe living situation with other tenants.

Also during this time, Preble Street was changing their organizational structure. Other departments had been closed because of COVID which meant Wefald’s department was absorbing those staff members. In Portland, a new supervisor was overseeing nearly 70% of the veteran population they serve with little to no experience or proper training. Thus, new hires weren’t getting the training they needed as well.

With waitlists a mile long, large shifts in the structure of the organization, and the pandemic putting a pause on in-person activity, Wefald was finding their job reduced to sending their clients applications to fill out. He was looking for more work to do during this lull.

“I asked my supervisor, and eventually the director of the program, ‘Hey, could you give me some more work? I don’t really have a lot of work right now,’ and they didn’t respond to that at all. One of the supervisors said I could help them with a presentation which ended up meaning we met for an hour a week and did nothing.”

“The craziest part – and I remember it being around May because I was just about to get my second dose of the vaccine – was they pulled me into this meeting. It was with the director of the program, my direct supervisor, another supervisor in the program, where they said, ‘Eric, we don’t think you’ve been very motivated the last couple of months,’” Eric leaned in with a fake look of concern on his face, “‘We think you aren’t as into the work as when you first started.’”

The exhaustion glazed over his eyes at that moment. I could see how much that comment hurt him after months of begging for more ways to help his clients after a grueling winter amid the pandemic.

“They didn’t tell me what I could do to fix whatever behavioral issues they thought I was having. They didn’t say anything specific about my work productivity. They just gave this blanket, ‘Oh, Eric, we don’t think you’re into the work anymore. That’s so sad.’ It felt incredibly condescending and it felt incorrect. All I wanted to tell them was, ‘You think I’m not motivated? I’m asking you to give me more work and you’re not doing it.’”

Wefald didn’t feel like he could say any of this in response to their condescension because it was never clear if this meeting was disciplinary or if he had the option of having his stuard present which he would have requested.

“It was really terrifying. I had never been pulled into a meeting like that before. And the more I think about it, they had that meeting because I was telling them to give me more work,” he explained. “I started feeling really shitty about myself and doing the work and I never really recovered. It felt pretty horrible to feel. I didn’t trust that my supervisors were looking out for my best interests.”

After that meaning, Wefald knew it was time for him to leave Preble street.

“I want people to know – I want everyone to know – how horrible of a time I had there. And I want them to change. They’ve been doing this for so long.”

Workers are beginning to see that what employers call “self care” is often a cover for their own inability or refusal to address major stressors that impact their employees. Often it feels that employers put the burden on the individual to take care of their stress without addressing the system that causes it in the first place.

Wefald also commented on how burnout caused by management’s refusal to change the system leads to retention issues. He believes that institutional knowledge is what builds a long lasting, quality social work and what best serves the community. With a revolving door of young, inexperienced and under trained staff, that knowledge doesn’t even have time to latch onto anything.

When it comes to tangible outcomes, Wefald is asking for three things.

Second, a burnout audit. This would mean an independent agency auditing Preble Street on staff mental health and giving recommendations to properly address issues with burnout and retention.

Third, treating employees with respect. Wefald is calling for Preble Street to listen to its employees that are working in the food programs, as case workers, and those whose complaints or ideas are often ignored. He wants to see the organization level its power structures to better address employee and client needs.

“I’m very scared for our clients. These are the people that are affected the most when there’s this mismanagement. When there’s all this pressure put on our case workers, our clients are the ones affected.” He continued, “Who knows what’s going to continue to happen to them when this really shotty social work keeps happening? It’s getting colder and colder. Winter is the most difficult time for people who are unsheltered. It is really life or death kind of work in the winter. I don’t know if we’re prepared at all to go into it properly.”

They leaned into the camera and looked out the window near their desk, “It’s scary work in that sense. It’s scary work that could be made all the more easier if they were able to properly address burnout, mental health, and listen to the pleas of their caseworkers.” This is the burden that social workers are carrying with them every day.

Wefald had written an open letter before leaving the organization where they made a series of asks. If you’d like to read that you can do so here. 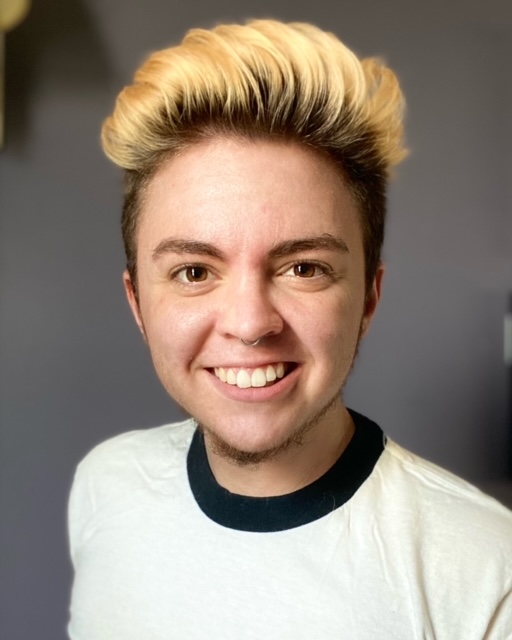 Sampson Spadafore (they/he) is a white, neurodivergent, Queer, Nonbinary Trans man currently living on settled Wabanaki land known as Portland, Maine. Sampson is a program coordinator with the Maine Humanities Council and proud to run their Poetry Express program. He writes poetry and articles focusing on mental health, Queer and Trans identity, sex and sexuality. They’re also an educator, theatre artist, model, activist, and steering committee member at MaineTransNet. Check out what Sampson’s been up to at samspadaforeofficial.com.